View of theatrical scene from behind the stage

Photo of two British army officers on camels posing in front of the Great Sphinx of Giza and the Pyramid of Cheops or Great Pyramid.

Beneath the photo the hand signature of who made this particular copy: the “T. Bolland Studio” in Uxbridge Road in Hanwell, London. They were “Photographers to the Queen”, as they claim on the Reverse of one of their cabinet cards. Behind the Officers the Great Sphinx can be seen before the major restorations of the XX century.

Terracotta on wooden base of ebony stain lacquer 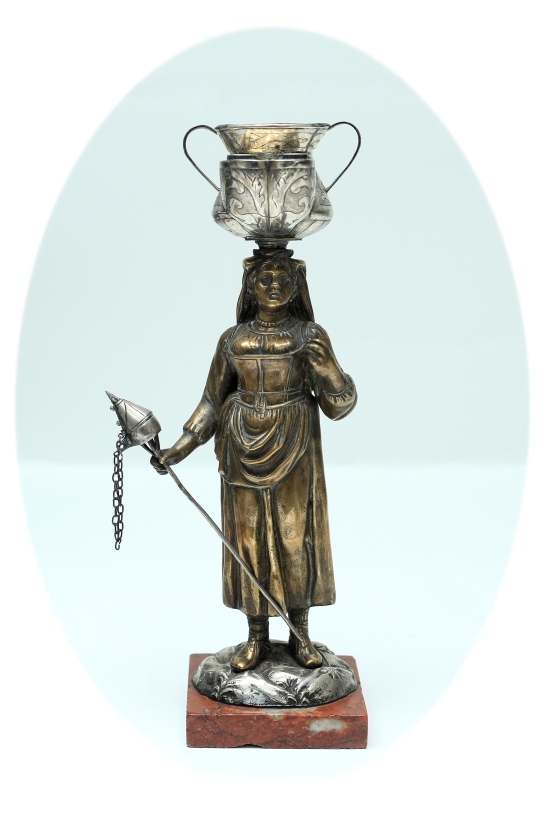 The oil lamps are a typical example of the production of Roman silversmiths in the late eighteenth and mid-nineteenth century. They were almost always of archaeological taste, taking the form of Atlas (or telamon ) or Egyptian figures or even the Greek and Roman gods (especially Mercury) and animals. As can be observed in the lamp shown here, the figure forming the stem were made of bronze, while silver was reserved for other parts of the lamp: the “globe” or tank was where the oil was poured and where the wicks and estinguisher were held. The lamp here, considering the barrel-shaped water carrier in a Ciociarian costume, surmounted by a silver tank shaped cannata (a typical bulging amphora with a large mouth, widely used by rural women in the Roman countryside and in Latium) is of great originality and can be dated with a good approximation in the third decade of the nineteenth century, a time when this kind of representations experienced were highly praised between artists active in Rome, from Bartolomeo and Achille Pinelli to Jean-Léon Gérôme. The absence of marks does not allow establishing with certainty the name of an artist; the hypothesis remains that it could be the work of the greatest silversmiths and bronze foundries active in Rome: Luigi Valadier (son) or Francesco and Luigi Righetti.